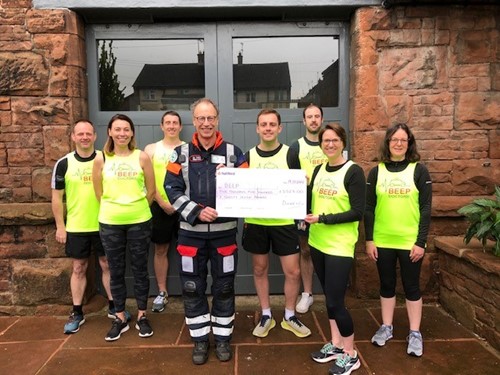 After a year of being unable to get out and about and take part in any fundraising activities, the BEEP Doctors have been out in full force this summer raising money for the charity.  On Sunday, 13th September a team of twelve runners undertook the 13.1-mile Great North Run and raised over £5,500.

Runners who took part were made up of individuals and a corporate team of 10 from Dodd & Co.  The accountants, who are based in Penrith and Carlisle took on the challenge to raise as much money as possible to help the volunteer doctors.  They have been big supporters of the BEEP Doctors over the years raising several thousand pounds for the charity through events such as bake sales and Christmas Jumper Days.  They raised £5,527 by taking part in the Great North Run.

Heidi Marshall, one of the Partner’s from Dodd & Co commented

“We are quite an active bunch at Dodd & Co, and it’s been really tough not getting out and taking part in sporting events during the pandemic.  It was lovely to be part of something again and run the Great North Run as a team and to raise money for the BEEP Doctors too.  It was a great feeling on the day to be part of the crowd again.  We had team members in different waves, but the camaraderie between us all was fantastic and knowing we had raised so much for charity kept us going around the route!”

Also taking part were Jo Holme and Alice Wilkinson as individual runners, who both completed the run.

“I want to personally thank all twelve runners who took on this incredible challenge on behalf of the BEEP Doctors.  Let us not underestimate what it takes for people to run any distance let alone a half marathon and the fact they want to put their bodies to the test while raising money for charity is fantastic.  Every penny raised means so much to all our doctors and I pass on our upmost appreciation to everyone who took part in the event and donated.”

BEEP Doctors are currently fundraising to provide essential lifesaving equipment for their team of volunteer doctors.  It takes over £30,000 a year just to keep the charity going.  The biggest cost is ensuring that the fourteen volunteer doctors are kitted out with all the essential equipment such as monitors and defibrillators that are required to treat patients at the scene of an accident.

In 2021 so far, the doctors have been called to over 300 incidents supporting the Northwest Ambulance Service and Great North Air Ambulance at the scene of road traffic accidents, farming incidents and traumas across Cumbria.

The doctors specialise in pre-hospital emergency care to ensure the patient has the greatest chance of survival.  Raising money through fundraising events, like the Great North Run are vital to ensure that the team of doctors can carry on treating patients in all four corners of the county.

The BEEP Doctors team have secured places for the 2022 Great North Run and are signing up runners already in preparation for next year.  The event will take place on the 11th of September.  It is £50 to register and secure your place and they ask that each participant raises £350 for the charity.

If you would like to help support BEEP Doctors (BASICS) Cumbria, you can donate online via their website at or even get in touch to run your own fundraising event.

Would you like to keep up to date with Dodd & Co? We send regular updates to keep you informed of any changes to accounts, tax and payroll. We also write specific industry updates across all our different specialisms.